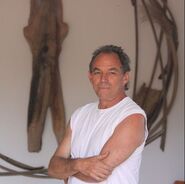 My career as an artist began at the age of 18. In the more than 50 years since I have explored some of the infinite possibilities in creating art.  From two dimensional representational works on paper to three dimensional sculpture and assemblages, I have worked in several mediums including paint,  metal, glass, and fiber, to name a few, often mixing mediums in a single work  Since the early 1990’s my focus has been and continues to be on painting (with acrylics) and assemblages constructed of driftwood and palm tree foliage.  It is the process of creating rather than any predetermined outcome that inspires and motivates my lifelong obsession with making art.